From Vintage to Prototype, Specialist Panel Beaters and Body Engineers.

For more information on each project please click the photograph

Little known fact: When the Aston Martin Virage was originally designed it featured these decorative and stylish scallops, they were included on the prototype Virage, as seen on the front cover of "Fast Lane" magazine November 1988. However prior to its release and official unveilling at the 1988 Birmingham Motor Show it was decided the scallops should not be included, possibly for fear of there being too many similarities between the Virage and the upcoming Aston Martin Vantage- which was released in 1993, and offered the buyer a higher specification car. Whilst at Aston Martin, Shaun worked in Production Engineering for the Virage, and Virage Volante, and so had knowledge of the scalloped design. With access to the original Buck, we were able to succesfully recreate this stylish design feature.

This beautiful Aston Martin DB4 left us recently to continue her restoration journey. She had been with us for some time, requiring extensive work to bring her back to her former glory! 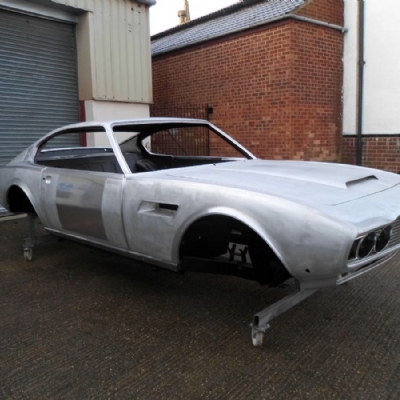 We completed extensive repairs and body work on this DBS as unfortunately there was more work required than we first anticipated. Both the front and rear end were repaired by us and the bonnet too was worked on. We were able to repair some structural chassis damage. Overall this car was with us for some time but worth the work required.

You can view more photos in our gallery here.

We completed various pieces of body work on this V8 for customer - Andy Stephen.  We sharpened up some lines, correted the fit of the bumpers and completed some other repairs, the main work was filling in the sunroof. We also made rails to go in the roof and a new headlining panel for inside of the roof.

This car came to us originally for replacement sills, however required slightly more work than anticipated by the owner and us, including replacement floors and boot floor and work required to the doors, you can view more photos in our gallery here

You can also read this customer's review of our work here

This DB4 Vantage 'Festalozzi' is named after its original purchaser, Professor Festalozzi, who had the car delivered new by the Swiss Aston Martin agent. On this particular car we fabricated a new front and rear end. 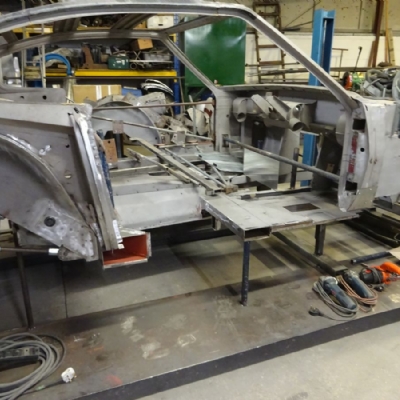 Bob has required a sizeable amount of work to the front end, which is not surprising when you look at the original panels! We have been busy making and fitting new bonet landing panels for both the front and side, which aid in building the shape of the front of the car, and once secured will allow for work to commence on the bonnet. The front end/ headlamp panel, which comprises of many smaller sections including top hat sections, headlamp mounting brackets etc which all contribute to the instantly recognisable DBS front end have been completely replaced. We do manufacture and sell the bonnet landing panels which you can view here if you re undertaking your own DBS restoration project, along with the majority of the parts we have replaced on Bob.

Bob is about to undergo a sizeable milestone in his restoration, which hopefully we'll be able to share with you the other side of the New Year. However for now work has continued on Bob, and still focussing on the front end, these photographs show a complete replacment of the footwell gusset to the right hand side of the car, the left only required minor repair in comparison. As you can see from some of the previous photos, the footwell gusset is located on the upper section of the chassis and provides support and structure to the car. We do sell Footwell Gussets, which you can view in our "Parts" section of the website.

Happy New Year! As you can see from the new photographs, Bob has both bonnet side landing panels fitted and fixed in place, and is patiently awaiting the ever important bonnet. The front wheel arches on both sides have also been welded in place and the front end is far more structurally sound than when he first arrived. All of the work completed on Bob so far, including the replacement sills, B post structure and various parts repaired and replaced within the front end/headlamp panel are finally coming together and we can see real progress in this whole car restoration.

Its been a little while since we last checked in on the restoration of Bob the DBS, and while this documentation of his restorative journey has predominantly focussed on the front end, we have also been busy repairing and replacing the rear of the car too. As you can see, when Bob came to us, the rear boot panel was split and pretty rusty, and so this has been replaced with a new one, as has his battery tray, which now sits upon a new boot side panel, and a complete new boot floor too. You can find all these components in our "Parts" section here.

We featured the repair of the "B Posts" a while back, where we also undertook repairing the rear wheel arches, as you can see it required some extensive structural repairs. While we stock a large range of Parts for the Aston Martin DBS, we do not manufacture many of the rear wheel arch parts, this is mainly because experience tells us, most of the time a little localised repair is all thats required (this is beneficial for us, as it is particularly difficult, in comparison to the front arches, to completely remove the rear wheel arches and replace with new!)

Bob is booked into be sandblasted and powdercoated soon so it has been all hands on deck these last few weeks to get him ready. You can see in the new photos added below that we've been busy on last minute welding and final touches to the chassis work, we have a roll over jig that we have used whilst working on Bob  to allow slightly easier access to some of the more difficult to work on parts. We unfortunately don't have the facilities to sandblast or powder coat at our workshop but we are happy to give our recommendations if you're in need of a similar service. We can't wait to see how he looks afterwards and will be sure to take plenty of photos.

Update: Its been a couple of months since we last checked in on Bob's restoration progress and as promised here are the photos of him post sandblasting and powder coating, this is a very important and significant stage of the restoration journey as it marks the finish of the structural chassis work. He has already been sandblasted once before at the begining of the chassis repairs, so this is classed as as reblast. This initial sandblast allowed us to see the full extent of the work required, and any damage that may have been masked by underseal etc.

Sandblasting and powder coating are two separate processes in which blasting the steelwork work removes any dirt, remaining paint or surface rust etc, it also gives an ideal surface for the immediate application of the protective powder coating, a happy concequence is the sandblasting and satin black powder paint give a nice uniform appearance to the chassis. It makes a huge impact to the overall appearance of the base chassis work to have this step completed and means that focus can start to shift towards the more cosmetic panel work, the next challenge being where to begin! You can see from some of the early photos in Bob's restoration that unfortunately there is not much original panel work, particularly the Front End, that can be saved due to sustained damage in his litetime.